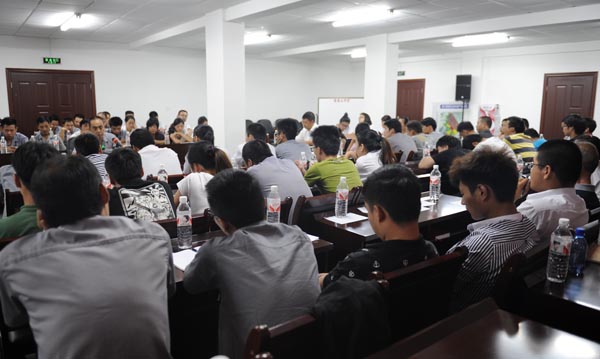 On September 18th, in order to achieve the rapid and healthy development of the company, to achieve the goals of customers, employees, shareholders, government and society, to stimulate the initiative of employees to contribute ideas, better serve the production and management of enterprises, and promote the healthy development of enterprises, the company organized The staff held the "I love our company" - "Golden Ideas" contest in the conference room of the administrative center.

The participants were composed of ordinary employees who had served for the third anniversary of the company. The middle and high-level cadres, middle-level cadres, and ordinary employees under the third anniversary formed a jury of judges. The employees put forward reasonable suggestions for the problems existing in the current company. After intense discussions and on-site defenses, comprehensive assessments were made from feasibility, operability, and promotion value. Staff Song Lizhen, Jiang Fuhai, and Zhang Shufan were awarded the “Golden Ideas” award; Zhao Tingjin, Huang Lu, Lin Cong, Lu Guojiang and Zheng Gezhong were awarded the “Silver Idea” award; ten employees including Lou Yongping and Lin Tingliang were awarded the “Good Ideas” award.