The company's party branch organized a two-day tour of Nanjing 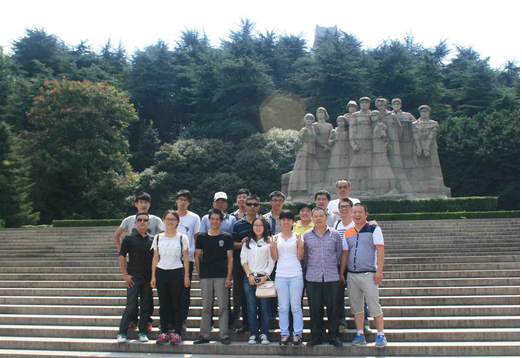 With the passage of time, the smoke of history has dissipated. In order to cherish the glorious years and relive the history of the revolutionary martyrs, from September 20th to 21st, the party branch of the company organized all party members to visit the revolutionary sites in Nanjing.

After more than six hours by car, we arrived at the first stop in Nanjing, the Nanjing Massacre Memorial Hall. The squares are all black and blue, and the dignifiedness is breathless. The castle-like exterior wall is awesomely written with a heart-rending number of "300,000" and sculptures under the outer walls. When the Japanese arrived, they panicked and fled. In particular, a mother with a child, panic, gives people a strong visual impact. The sculpture is a solid history, accusing the world of the history of blood and fire, accusing the humiliating years. The Museum of Literature and History uses modern means to display the crimes of the Japanese massacre in the form of pictures, images, and objects. One piece, one scene, and shocking, we cannot bear to see it. We feel the dignified and tragic atmosphere of the memorial hall. Later, we visited the presidential palace, which used to be a place for many celebrities to work. Everyone has visited the sub-super building, the Gion, the executive office, the temporary presidential office, the Sun Yat-sen living room, the presidential meeting room and other places, so that everyone's history of the Republic of China has further deepened.

On the second day, we visited the tomb of Sun Yat-sen, the forerunner of China's modern democratic revolution, the Sun Yat-sen Mausoleum and the commemorative holy land of China's new-democratic revolution. The majestic, solemn, magnificent, and imposing manner of the Sun Yat-sen Mausoleum gives us a lot of awe. After paying homage to Mr. Sun Yat-sen's marble statue and the engraving of Mr. Sun Yat-sen's handwritten book "The Founding of the People's Republic" on the wall, it is even more impressive. Yuhuatai is also a place where people can respect the hero. Here, we see the monument of revolutionary martyrs with gray stripes. The long light in front of the monument represents the perpetuity of the spirit of the revolutionary.

In this tourism event, we cherish the memory of the martyrs and the compatriots who died. This is a baptism of the soul, which makes everyone feel the passion of our nation. In addition, it also promoted the party's mass line education practice activities, raised the patriotism of party members, and educated party members not to forget history and bear in mind the mission.